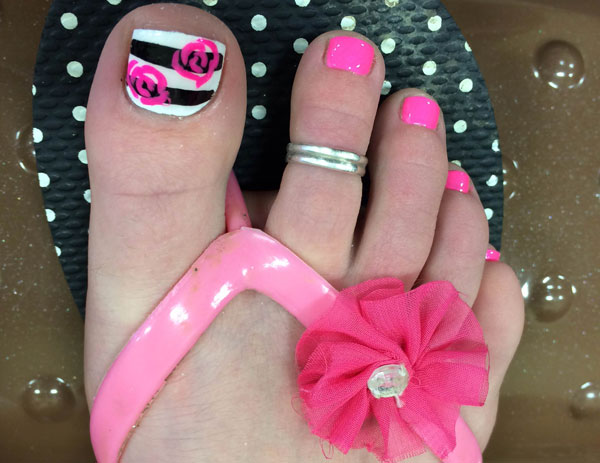 Pedicures in the Press

Newsy Bits About Our Favorite Health and Wellness Procedure


Pedicures are generally soothing, sensual delights that are an essential part of an active, healthy lifestyle but not usually news-worthy unless it intersects with another area of interest such as the entertainment world. Science usually doesn't enter into it. Sure, if serious-looking people s in white lab coats want to observe, measure, and postulate while some nice person massages our feet and calves, most would merely say, "Have fun with your sciency stuff, I am going to enjoy this immensely unscientific pleasure instead."
That doesn't mean, however, there is no science to pedicures. In fact, besides the medical science that goes into the process, newspapers often feature stories of how pedicures and serious studies meet. Don't believe me? Check out these great stories that have pedicure angle.

Pity poor lab rats. Not only have their freedoms been taken away without due process, they are even less loveable than your ex's divorce lawyer. Worse yet, up to 21% of them are susceptible to a painful skin condition known as ulcerative dermatitis. When the repulsive rodents get the disease they chronically scratch themselves with their razor-sharp claws until they are bleeding and suffering so much, they must be prematurely relieved of their tiny mortal coils.
Fortunately for the furry vermin, a Stanford University initiative has found a procedure they can employ to save these poor rats from their fatal itch; yup, it's pedicures.  Researchers have discovered that keeping the rats' nails tidily trimmed helps prevent the rats from scratching their ulcerations too deeply.  You can read more of this cool story here . The piece did not mention if the rats' pedis included polish and glitter.

Pedicure; the Perfect Reward for a Healthy Lifestyle

Scientific studies have shown that the early bird may get more than the worm but also a healthy, fit body. Starting your day with a crack-of-dawn exercise workout is the key to being energized and alert for the rest of the day. How then do we motivate ourselves to drag ourselves out of bed for these grueling workouts?  According to UK fitness site, PopSugar, one answer is to promise yourself a pedicure.
In the article penned by Jenny Sugar, the best way to ensure you stick with your early morning regimen is to maintain a system which includes effective rewards. The best of these rewards is, of course, a lovely, relaxing pedicure. This is the ideal since, unlike food and drink rewards, pedicures do not have calories, carbs or cholesterol, and won't contribute to tooth decay, heart disease or liver damage. For a complete look at how to maintain an early morning exercise habit, here's the original article. http://www.popsugar.co.uk/fitness/How-Wake-Up-Early-Exercise-Morning-39763553

The health-science experts at the Vancouver Island Health Authority have ordered the Purple Orchid Spa in Duncan, BC to stop offering fish pedicures.  The salon had been using itty-bitty Gurra rufa fish that are specially brought in from Turkey for this purpose. The fish, which lack teeth, use their tiny suction cup mouths to munch on your dead skin cells during the exfoliation process.  (Ewww!)
The Health Authority, however, notes that these fish cannot be sterilized between customers and therefore the spread of infection is a major concern. The Vancouver health folks point out the fishy procedure is already illegal in three provinces, including Alberta, as well as in 14 US states. Check out the CBC report here. http://www.cbc.ca/news/canada/british-columbia/fish-pedicures-banned-by-b-c-health-authority-1.1104522

Whether you are a fan of health science or healthy sensuality, it seems apparent you need a pedicure soon.  Make an appointment with Binh's professional pedicurists to get your own personal reward for a week well done. Lab coats are optional.