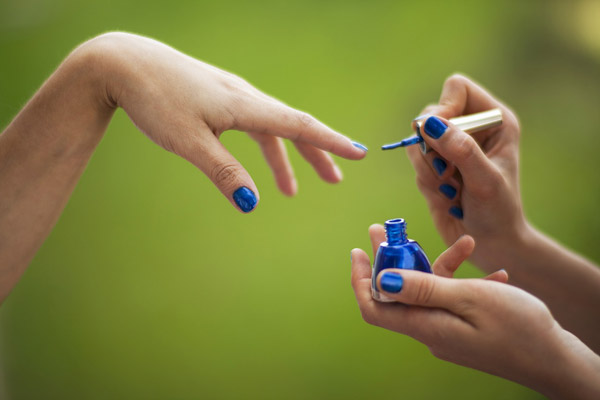 Manicure: A Brief History of Time to Relax

How manicures came to be.


Although manicures have a modern, cutting edge vibe to them, the practice of adorning fingernails with various colours and textures goes back to prehistoric times. It seems hardwired in us to value personal decoration, since humans have always done it, and we will probably not stop any time soon. Since those early days of Naomi Neanderthal sporting artificially pretty claws, a number of advancements through the ages have led up to the current explosion in manicure tech. Here is a timeline of manicure milestones which have created a $10 billion global industry.

The Dawn of Time - Archeologists claim the early hominids hanging around the planet before modern humans were invented, were very appearance-conscious. Some were buried with what appears to be ancient "bling" and rudimentary appearance-enhancement instruments. It's safe to say as a species, humans and the beauty industry go back a loooong way.

3500 BC - According to historians, ancient Babylonian men were quite mani-conscious and applying "kohl" to their fingernails was hugely popular. Made from ground up stibnite, kohl is one of the first cosmetic ingredients invented and was available in a range of shades. For Babylonian "bros", the colour you wore on your nails announced your social status. Upper class types wore black while those in the lowest classes, blog writers, for example, were stuck with green.

1300 BC - The wealthy peoples of both ancient Egypt and long-ago India also caught the mani-craze and began decorating their nails with bright, eye-catching pigments. The more brilliant the shade, the more important you were.  As per usual, the commoners had to be satisfied with paler versions of the elite's bold hues. The more things change, the more they stay the same, eh?

1368 AD - During the Ming Dynasty in China, manicure hues were made using a combination of gelatin, egg whites and wax which sounds so tasty, it may have led to the development of nail biting. Ming female aristocracy took manicures a step farther with the adoption of the first false nails, which were made from precious metals like silver and gold and were slipped on like a thimble. The style didn't last, however, as it would have made texting on cell phones rather difficult.

1800 - Manicures became popular in the New World with pioneer ladies preferring super-short, almond-shaped styles which could stand up to the rigours of frontier life such as changing the tire on the chuckwagon and "stone-washing" their clothes on rocks down by the river. They used perfumed oils for scent and colour in their manicures which were performed using special metal tools and different types of acid. (Acid-washed jeans are cool but acid-washed fingernails?)

1830 - Manicure instruments experienced a huge advance when an American physician named "Dr. Sits" got the big idea to use a rough chunk of orange tree to smooth the edges of ladies' fingernails, thereby accidentally inventing the modern nail file. His niece took the idea further and created a whole set of inexpensive mani-tools for retail sale which went viral, or at least as viral as things could go in the early 1800's.

1850 - The word "manicure" was coined to describe this type of hand care which is still in use today. This word was created from two Latin words, "manus", meaning "hand" and "cura" which meant "care".

1921 - Shortly after the blossoming US auto industry developed special types of paint for their new-fangled  horseless buggies, the already millennia-old manicure supply industry instantly snapped it up for their own purposes.

1925 - The first pink nail polish was invented and it went immediately viral. This new development quickly led to the first named fingernail design, "The Lunar Manicure", which consisted of a simple pink stripe in the centre of the nail, leaving the rest of the nail bare.

1930 - Women finally move past pink and adopt red as the most popular nail shade. The short, almond-shaped styles of the pioneering days had been exchanged for much longer nails which were painted over completely. The sudden shift from pink to red was possibly a result of the timely invention of nail polish remover, five years after the polish was first created.

1932 - Cosmetic giant, Revlon, founded by brothers Joseph and Charles Revson, along with chemist, Charles Lachman (who generously provided the "L" in the Revlon name) started to manufacture clear nail polish. Soon they began adding natural pigments instead of paint, which made a rainbow of subtle shades and hues possible, although blood red was the most popular by far.

1933 - Max Factor, a Polish immigrant to the US who became a pioneer in Hollywood movie makeup, commenced selling a smooth, tourquoise polish which helped break the Revlon's monopoly on the blood-red nail style and brought manicures into a whole new era.

1937 - An American company received a patent for a product to strengthen fingernails.  It is the first attempt at a manicure product not specifically designed for beautification. Unfortunately, nail breakage continues to this day and inevitably at the worst moment possible.

1949 -  The basics of proper manicure began to be publicly taught by beauticians and hair dressers. Other than Hollywood stars, the vast majority of manis were still being done by the owner of the fingernails.

1954 - American Dentist Fred Slack, to fix a nail he broke at work, created a very real-looking artificial replacement. After testing various materials to perfect his invention, he and his brother, Tom developed a marketable version, founding the company, "Patti Nails".

1973 - The Dawn of the Age of Acrylic Nails. Manicures had finally reached the level of art and became an inseparable part of every successful woman's life.

1975 - Tippi Hedren, an American actress best known for her role in Hitchcock's "The Birds", goes to Vietnam and teaches manicure to a group of women she was trying to help. Soon Vietnamese manicurists become Vietnam's largest export. The art form spread to the rest of Asia and then, to the West.

1981 - Gel nails appeared on the scene. People hadn't figured out the whole UV light aspect yet so they failed to become popular.

1998 - Gel nails and the gel light were combined to drastically improve the product and finally caught on. Big.

2015 - Binh's Nails Tamarack in Edmonton is opened by Grace Zhang, revolutionizing the manicure industry in Edmonton, Canada. Come on down and make some manicure history with us!