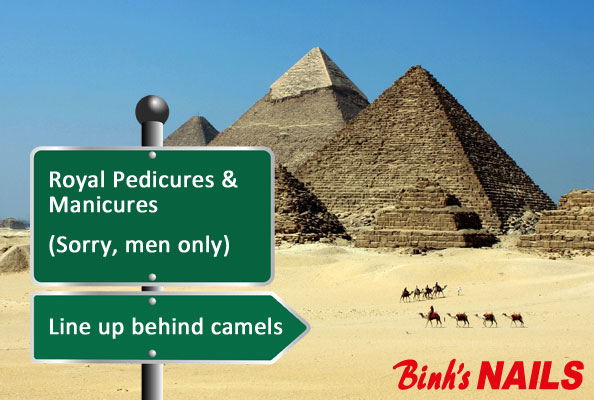 And not just because we're smarter!


Way, WAY back in the day,  at least, what we have learned so far, the first manicures and pedicures were solely the province of male royalty. Only Pharaohs and other highfalutin fellas were allowed to adorn their nails with colourful hues. No women were allowed in the manicure club back when the pyramids were being built, as it was thought that decorated nails were much too masculine to be appropriate for females. Fast forward a few millennia, however, and it is primarily the fairer sex that makes time for these salon services. The only exceptions seem to be male "lifestyle" writers doing a puff piece on crossing this particular gender barrier. Why has proper nail health fallen out of favour with males but has been taken up so overwhelmingly by females? Let's examine the facts.

That was Then. This is Now.

It's hard to say why or exactly when the transition from "only for men" to "mostly for women" occurred but few modern women are complaining. Taking an hour out of their busy schedule for a well-deserved well-being break is something most modern females enjoy thoroughly and need to do more of, not less. We can only pity the current crop of fellas who have forsaken manis and pedis and can only enjoy "manly" forms of relaxation such as Monster Truck shows, Bull Riding competitions and UFC cage matches.

What Women Really Get out of Salon Services

Of course when our clients leave our salon they are happy about the refreshed feeling they have in their hands and feet, as well as the lovely colours and designs applied to their nails, but what they are happiest about may be entirely unrelated to the finished product. Here are other aspects of receiving salon care which women have come to appreciate but don't seem to be a priority for most males:

What Men are Missing

Unfortunately for the fellas, soft hands on men are not considered to be very masculine. However, if one were to survey all the women who must bear the touch of our tough-skinned lifemates, we're certain most would approve of their man having less scratchy "mitts". Maybe it's time for women to apply the pressures we know work so well on our guys and break down their resistance to paying attention to hand and foot care. After all, we're worth it, maybe men are, too!